> Book Shelf > A Soprano on Her Head: Right-Side-Up Reflections on Life and Other Performances 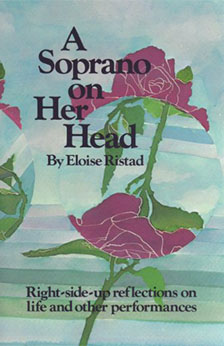 Color in My Piano

"Eloise Ristad's alternative teaching methods have given me deep insights into some of my long-standing playing 'problems' that traditional methods have failed to touch."

A musician’s desired state of mind, according to Ristad (and other like minded people) is to be a conscious observer free of judgment. So when that difficult passage you always get wrong does go wrong, refrain from saying, “Oh no, I am so horrible – I’ll never get that right,” but instead say, “That would sound better if…" " my body is doing [blank], maybe [blank] might work better" "I imagine that phrase would sound great if…” leaving behind any negativity that may try to creep in.

A prominent theme in Soprano is dealing with what Ristad calls “judges”. The biggest catalysts of performance anxiety are fear of failure and fear of being judged. Early in the book, Ristad describes an exercise she uses with students in workshops, where they envision imaginary judges and hold a dialogue with them. Some people picture stuffy teachers or snooty peers. And of course many people describe inter judges to be within. Ristad reiterates, throughout A Soprano on Her Head, that somehow giving ourselves permission to fail will often lead to success. For instance, should there be a very high note in a difficult passage, if a violinist keeps hitting that note flat, then she should intentionally try to play it flat. It seems counterintuitive, but chances are that she will instead hit the note right on.

If I were not a physicist, I would probably be a musician. I often think in music. I live my daydreams in music. I see my life in terms of music.